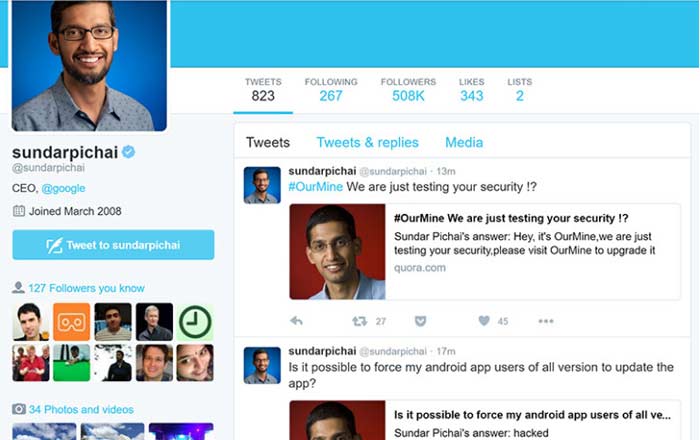 Google CEO Sundar Pichai has become the latest victim of hacking group OurMine which has been terrorizing top tech executives for the past month. The three-man team behind the outfit has successfully managed to compromise the accounts of high-profile names like Facebook CEO Mark Zuckerberg and Twitter co-founder Evan Williams.

This time round, OurMine has hacked Pichai’s Quora account. Unfortunately for the CEO, he had linked his page to his Twitter account, meaning the group had the power to publicly show off their hack to his half a million followers. This is exactly what they did, posting questions and answering them with a message stating that the team was just testing his security and requesting him to upgrade it.

The tweets were subsequently deleted from Twitter. OurMine is apparently trying to rebrand themselves as a security firm complete with their own official website, offering to help the targets of their attacks so that these nightmare scenarios don’t happen again. It comes across as a strange way to garner clients if that really is what they’re trying to do.

OurMine later told The Next Web that they were just testing security and had never actually changed anyone’s passwords. The three-man group claims they did it because there are other hackers who can hack a person’s account and change everything. The firm then went on to assert that they managed to break into Pichai’s account by taking advantage of a vulnerability in Quora’s platform.

The hacking outfit claims that they had informed Quora about the exploit but it failed to respond. The company itself has a different story to tell. As per a statement it gave out, the company is confident that Pichai’s page wasn’t hacked via a vulnerability. This is consistent with the team’s past behavior where they had gained access by exploiting previous password leaks on other sites.

Quora also maintains that it has no record of OurMine reporting a problem to it. It’s now asking users to utilize unique passwords on different accounts so a security breach in one doesn’t compromise another.