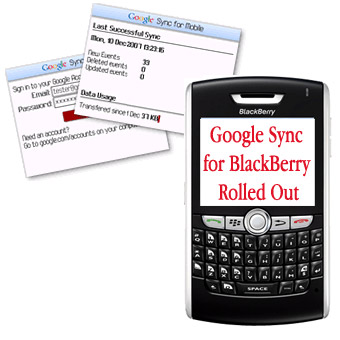 Internet giant Google has released a free download, through which BlackBerry owners will be able to sync the Google Calendar feature with their handset.

A few months back, Google developed a mobile version of Google Calendar that gave any mobile phone user the ability to access their schedules easily through the device’s internet browser.

However, by syncing the Google Calendar to the BlackBerry, users can view their schedule even in places where the wireless reception is weak or even unavailable. Now that’s surely quite an enhancement!

Users need to visit http://m.google.com/sync on their BlackBerry device to download and install Google Sync. Once it is installed, a new Google Sync icon will appear on the phone, and from there you need to simply launch the latest application, sign into your Google account and your Blackberry calendar will then sync with Google Calendar.

Apart from the Calendar Sync feature, Google has also added a one-click update for Google Mobile Products. All you need to do is visit mobile.google.com via your BlackBerry.