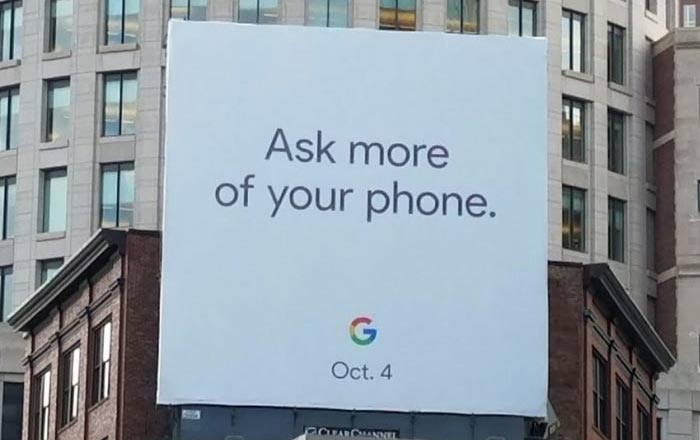 In the midst of all the excitement and fierce debate surrounding the iPhone X, Google has decided to put up a billboard to generate hype over its own Pixel 2 and Pixel 2 XL. The sign was spotted on the streets of Boston and sent to Droid Life.

As is the trend for early teasers, the billboard doesn’t give much away. It simply tells people to ‘Ask more of your phone.’ This statement in then followed up by the Google symbol and an October 4 date. It’s fair to assume given the blatant clues that Google is planning a Pixel event on that particular date.

Previous reports had actually suggested that Google would opt for an October 5 unveiling, but October 4 makes sense as well since that was the same day it showed off the original Pixel pair to the world. The sequel to the series is widely believed to be taking a slightly different approach this time round, opting for an HTC-made Pixel 2 and LG-constructed Pixel 2 XL.

The second recently popped up on the FCC recently. Unlike the last time this happened with the Pixel 2, the Pixel 2 XL listing doesn’t reveal a whole lot of information. One aspect which is guaranteed is the fact that LG is responsible for the latter since the handset bears the FCC ID ZNFG011C.

ZNF is LG’s FCC grantee code and G011C is likely the Pixel XL 2’s model number. The Pixel 2 has the model number G011A. The letter ‘B’ is clearly missing between the two. That may be because there used to be a HTC-manufactured Pixel XL 2 which got canned at some point of time for reasons unknown.