Google scores badly on its own website testing tool

Google has launched a website testing tool for those who want to check out how fast and mobile friendly their domain is. All users have to do is go to the site built by the Think With Google developers and paste the concerned URL into the box provided, before hitting the TEST button. The results are broken up into three parts showing how much the website being analyzed scores on Mobile Friendliness, Mobile Speed and Desktop Speed.

The thing is, the team behind the tool don’t seem to have done enough to ensure that the Think With Google site itself passes with flying colors. It scored poorly with 59/100 on mobile speed and 66/100 on desktop speed, when TNW checked. Some changes appear to have been made since this news came to light though. Think With Google now has 72/100 and 80/100 (noted to be Fair scores) on mobile and desktop speeds, respectively. Incidentally, Google.com rakes up 100/100 on mobile friendliness and speed, and 99/100 on desktop speed.

As you know, Google has been focusing heavily on getting webmasters to up their game in terms of mobile friendliness. Its search algorithms have been changed to be more ‘hostile’ to websites which load slowly on mobile. The company has opened Accelerated Mobile Pages (AMP) to any publisher aiming to have their posts load with lightning speed on mobile devices. A few days ago, the Google app for iOS also started showing AMP. Just today, the company announced that AMP for Google News has been extended to the UK, France, Germany, Italy, Mexico and Russia. 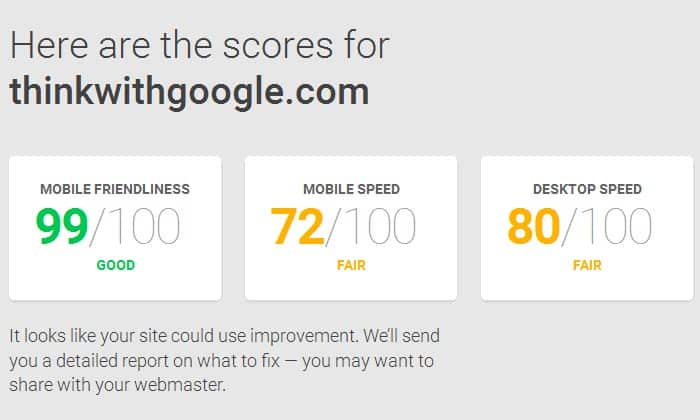 Going back to the website testing service, Google already offers options like PageSpeed Tools and PageSpeed Insights to developers, webmasters and site designers. Its latest introduction is an attempt to reach out to small business users and others who may not be well versed in the relevant technical details. Domain owners testing their website through the tool can even sign up to receive a report on issues which can be fixed to improve their scores.