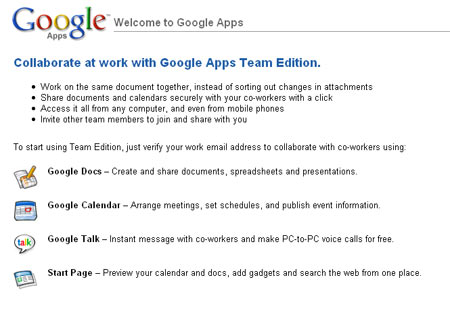 Google has released the new Google Apps Team Edition, which is aimed at providing user-friendly applications for employees. Rajen Sheth, Google Apps senior product manager said that the new release is aimed at employees who are keen to use Google App, while but their employer has not signed up for it.

The new Team Edition comprises of other applications from Google such as word processor, spreadsheet, Start page, Talk instant messaging and calendar.

With the Google Apps Team Edition, internet giant is offering employees the chance to set up Google Apps workgroups. The only mandatory thing is that employees should have a valid e-mail id with their organizations’ domains.

Also the new application facilitates the user to see his/her co-workers, who have already signed up for it.

Moreover, Team Edition can also be upgraded to Education edition, which is free and Premier edition costing $50. However, Gmail is not a part of the Google Apps Team Edition.

“Google Apps has been, by definition, an IT project, and now we want to let people use it without IT involvement,” said Rajen Sheth, Google Apps senior product manager.

As of now the Team Edition is available for free. And the most important thing is that employees do not have to involve the IT department for using the Team Edition, they just have to sign-up for it.