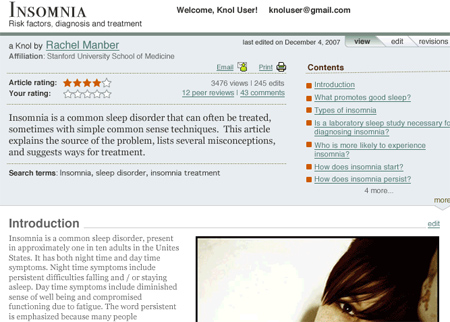 There was a time when Google was not just a search engine, but everyone’s favorite one at that. Now, when you see the Mountain View-based company in the news, it’s either got to do with a lawsuit tangle or rumors of a new Google product (which will try to compete with an already existing product from a rival).

Now, it appears that Google is working on a user-generated online encyclopedia that could well provide huge competition for Wikipedia. Google’s new service has been code-named ‘knol project’ or the ‘unit of knowledge’ project. The company aims to try and “tie strong identities to contributing authors and those seeking to edit knols.”

Google’s engineering vice president Udi Manber, in a blog post on Google’s Web site said that Google hopes knowledgeable people will create an experience that could have an effect on a host of topics that could go well beyond those subjects covered in an encyclopedia.

“Our goal is to encourage people who know a particular subject to write an authoritative article about it. The goal is for knols to cover all topics, from scientific concepts to medical information, from geographical and historical to entertainment, from product information to how-to-fix-it instructions,” continued Manver in his blog post.

It is also learnt that Google itself will be hosting and providing the tools to help users produce and edit knoll pages. However, the company will not edit any of the content as only the author will have the authority to edit it. If someone really wishes to contribute to that subject, then they will have to set up competing ages under their own names.

The only thing however, which will set Knol apart from rival Wikipedia is the money factor. Google plans to let authors choose whether they wish to place ads in their articles and if they do choose to do so then they will receive a percentage of all revenue generated from visitors to it.

As of now, the Knol project from Google is yet in an invitation-only phase. It is most likely to go public within a few months time.

The company also says that the new search engine will avoid some of the privacy concerns directed toward Google by refusing to share data with advertisers or store users’ search terms.