Google+ for Android has since long been an extremely good-looking app, but it’s quite a tragedy that it lacks the popularity which its contemporaries (read: Facebook) enjoy. Mountain View it seems isn’t content with sticking to that interface, for it has gone ahead and given it a complete overhaul.

The red app is even redder now, with a prominent top bar grabbing flat icons forming a visual highlight. There’s a new floating pencil icon which you can click on if you wish to make a new post. The black-colored bar at the bottom has been taken away as a result of this. 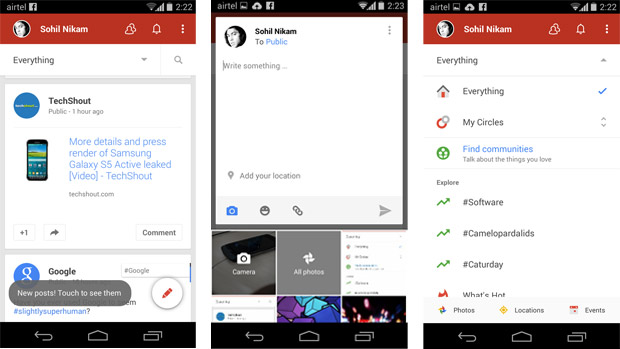 The most important victim of this new Google+ update is the navigation drawer which you could pull from the left hand side. Its functions are being taken care of by a horizontal tray which opens when tapped. The navigation drawer is part of Google’s design philosophy which has reflected in almost all other apps made by the company. Does this mean that they too are lined up for a similar makeover?

Many other subtle and beautiful changes find the way into this app as well, and we have to admit, it is much more responsive and easy-to-use following the update. Apart from Android, Google+ also thrives on iOS, but there are no reports of this new user interface having made its way onto Apple’s software as yet. A future possibility cannot be ruled out however.

Just like this Google+ revamp, a lot more other changes are expected to hit the company’s apps following its I/O event in June this year. Stay tuned for all the latest from this grand gathering.