After months of guessing, Google has finally revealed the name of its new Android version – Android 9.0 Pie. It’s not a particularly creative name, but at the end of the day it’s what’s inside the pie that matters.

There’s a lot inside as it turns out. Most of the new features were revealed earlier this year with the Android 9.0 beta release. All-in-all, it’s a pretty solid update. Google is putting a lot of emphasis on AI improving your smartphone experience rather than introducing any new experiences. 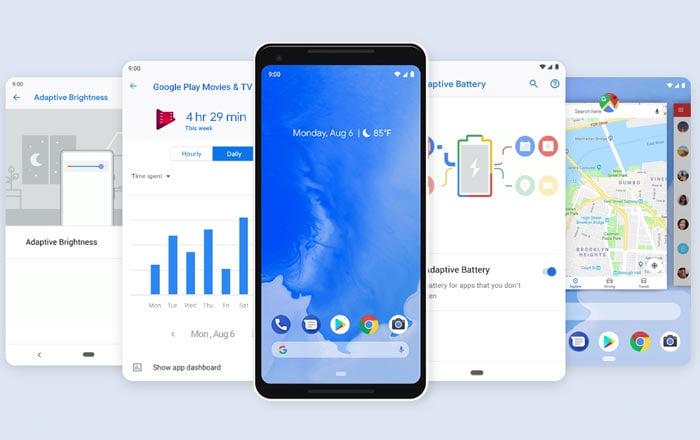 For instance, Android Pie’s Adaptive Battery tool will learn which apps you use the most and reserve battery power for them over others. Adaptive Brightness similarly learns how high or low you like your brightness to be in different places.

Then there’s App Actions. The feature uses artificial intelligence to predict your next move. If you’re going to work in the morning, it’ll suggest options like navigating there via Google Maps or listening to an audiobook via Google Play Books.

Android 9.0 Pie also introduces an iPhone-X like single home button which appears as a thin white bar at the bottom of the screen. This makes sense since so many Android phones are ditching the physical home button. Swiping up will showcase the new-and-improved Overview screen, now with Smart Text Selection support for easier multitasking.

Sadly, Google isn’t rolling out everything it promised right now. Slices will be coming out later this fall, as will the brand’s Digital Wellbeing tools. The former shows you a “slice” of an app when you search for it in Google Search, telling you key info like prices and ETA for rides home in the Lyft app.

Digital Wellbeing consists of options like App Timer to set a time limit on apps, Do Not Disturb to stop visual interruptions, and Wind Down to switch on Night Light, activate Do Not Disturb, and fade to grayscale before it’s time to sleep. You can try out these tools on your Pixel by signing up for the beta program here.

The Pixel, Pixel XL, Pixel 2, and Pixel 2 XL are receiving Android 9.0 Pie via an OTA update right now. All the devices which participated in the beta program and are part of the Android One program will get the upgrade by the end of this fall.

Beta members include the Sony Xperia XZ2, Xiaomi Mi Mix 2S, Nokia 7 Plus, Oppo R15 Pro, Vivo X21, OnePlus 6, and Essential PH‑1. The last has already begun rolling out Android 9.0 Pie to its users, something of a record in the smartphone world.