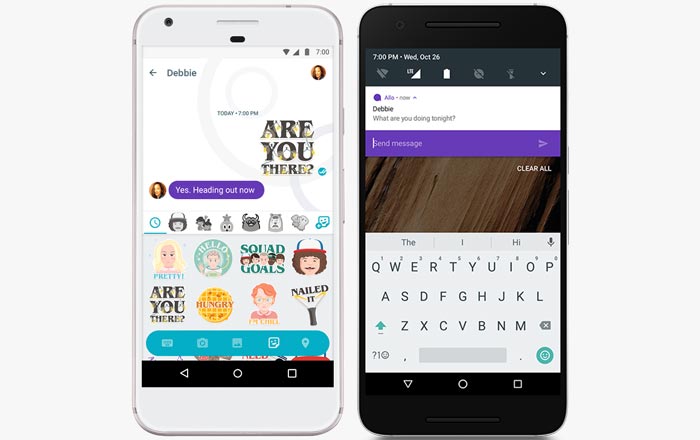 Google’s AI-powered Allo chat app has just gotten a slew of new features in version 2.0 of the platform. The company’s also partnered with Netflix to introduce a special Stranger Things sticker pack just in time for Halloween.

First-off, Google has added support for Android 7.0 Nougat so you can now enable split-screen multitasking to run Allo and another application side-by-side. There’s also a new app shortcuts tool which lets you kickstart a chat directly from the home screen of your handset.

Allo version 2.0 further gives you the freedom to directly reply to notifications without having to open the app. Other welcome new skills as revealed by Justin Uberti, Allo co-lead, include landscape mode, GIF keyboard, accessibility mode, and Incognito key alerts.

Allo for iOS is getting an additional feature which lets you doodle on images before sharing it with friends. As for the Stranger Things tie-in, you can download the new sticker pack right now. There are over 24 of them encompassing a bunch of cool references to the show and original artwork.

Google Allo has run into some major controversy ever since it was announced back in May this year. At the time, the brand had promised to make sure all non-Incognito chats would be stored for a limited period of time before getting deleted.

However, Google changed its stance when Allo was officially released in September, choosing to keep these messages on its servers indefinitely until a person deletes them. This reversal in its policy prompted widespread criticism, even earning the condemnation of Edward Snowden who called Allo ‘Google Surveillance.’

You can download Google Allo via the App Store or Play Store.