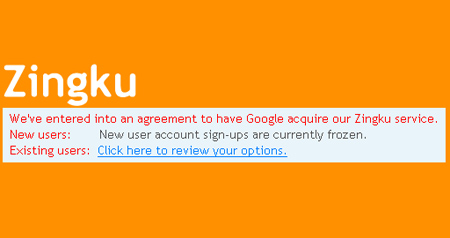 In a move to bolster its presence in the mobile phone sector, Google has announced that it is buying mobile social networking firm Zingku, which is essentially targeted towards teenagers and the youth. No financial details of the deal have been revealed yet.

The service will move to Google server by October 4, states AP.

In an email, a Google spokes stated that the internet giant has taken over “certain assets and technology” of Zingku. “We believe these assets can help build products and features that will benefit our users, advertisers and publishers.”

On the other hand, from Zingku’s end, the company informed its users that it had entered into an agreement for Google to acquire its service, read a statement in its website. Zingku further added that its users have time till Thursday to want to continue or delete their existing accounts. After the deal, all the accounts will be transferred to Google. All new accounts have been frozen right now.

The tech start-up Zingku, which at present is in a “private beta,” is a free service that uses standard text and picture messaging on a mobile phone and a Web browser, saving people from the hassles of installing an additional software.

In July, Google took over GrandCentral Communications Inc., a web-phone calling service that allows users of its software to merge all their phone numbers and voice-mail boxes under one phone number, enabling them to manage several phone features online.