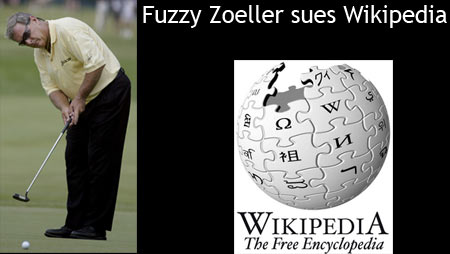 Fuzzy Zoeller, a 55-year old professional golfer has now slapped a lawsuit on the owner of an IP address from where defamatory remarks were posted onto Wikipedia. Remarks alleging that Zoeller abused drugs, alcohol and his family were posted onto the popular Wikipedia website way back on December 20, 2006.

Zoeller was prevented by the law from suing Wikipedia directly, and as a result he tried to locate the IP address from where these allegations were stemming. The IP address of the defaming posts was traced back to education consulting firm, Josef Silny & Associates of Miami.

Mr. Silny, on the other hand has said that he is really surprised that the complaint originated from his computer systems. Besides, he said, he has no idea who at his company might have made the offending Wikipedia posts. Silny also said that he was shocked to learn that his company was targeted in the lawsuit. He has also asked his computer consultant to investigate the complaint.

Wikipedia is an online encyclopedia that gives anyone the right to edit. However, previous instances where Wikipedia was defaced and edited with potentially insulting and defamatory information had people affected by inaccurate Wikipedia entries such as John Seigenthaler, a former assistant to Robert Kennedy, being falsely accused of being a suspected participant in the assassinations of the Kennedy brothers.

Following many of these incidents, security was beefed up, so as to prevent these kinds of incidents from happening in the future. However, in spite of the security improvement, which have some pages locked completely, users who earn the right to access files are still able to change pages that have remained unlocked. This has made Wikipedia, the online encyclopedia vulnerable to such defamation attacks or other inaccurate information.

Reportedly, the following statement comes from paragraph 11 of the lawsuit and includes the alleged remarks, “Later (Mr. Doe) went public with his alcoholism and prescription drug addiction, explaining that at the time he made those statements, he was ‘in the process of polishing off a fifth of Jack (Daniels) after popping a handful of Vicodin pills’.”

The statement further continues, ““He further detailed the violent nature of his disease, recalling how he’d viciously beat his wife Dianne and their four children while under the influence of drugs and/or alcohol. He also admitted feigning a ruptured spinal disc in 1985 so as to be prescribed a multitude of prescription medication. He has since sought professional help and mended his fractured familial relationships. In May 2006, (Mr. Doe) said in a interview with Golf Digest magazine that he hadn’t beaten his wife in nearly five years.”

As of now, these paragraphs have been removed from Zoeller’s Wikipedia entry. Silny is yet confused about the whole issue, and has hired a computer consultant to conduct an internal investigation. Wikipedia on the other hand, has claimed that it was not informed at all about the case, until it hit the media.

Zoeller sparked controversy at the 1997 Masters tournament, when he called winner Tiger Woods “that little boy” and urged him not to order fried chicken or collard greens for the following year’s menu. Zoeller later apologized to Woods, but that didn’t satisfy K-Mart and Dunlop. Both companies ended endorsement deals with Zoeller.