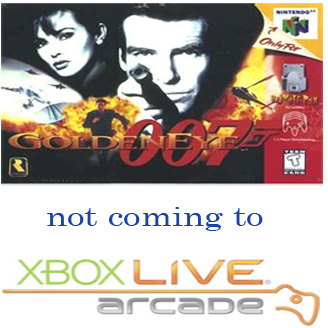 GoldenEye OO7, Rare and Nintendo’s classic James Bond first-person shooter game is one of the much-awaited games that was rumored to arrive on Xbox Live Arcade. However, reports have surfaced that the game will NOT be coming to XBLA.

The GoldenEye port has been in development at Rare for a couple of months now. Incidentally, the game was never intended to be made as a remake when it was first developed for the Nintendo 64 video game console in 1997.

The XBLA version of GoldenEye 007 was expected to feature the same graphics, maps and weapons from the N64 version. Unfortunately, with the highly demanded online multiplayer mode for Xbox Live, seems like it was not meant to happen.

Further, it is known that a number of actors were not willing to comply due to licensing issues and thus several characters could not make the cut into the game.

The real reason for GoldenEye 007 not making its way to the Xbox Live Arcade service remains the shortage of resources in the form of money.

A source close to Rare even said that the XBLA conversion of GoldenEye 007 was a mere two months from completion. However, Microsoft and Nintendo could not seem to agree on the financial terms. According to this source, quoted by 1Up, the main point of contention was whether Nintendo was to receive a one-time fee for the rights to the game, or continuing royalties based on sales.

So all you James Bond fans and video gamers alike, if you really want GoldenEye 007 to hit the XBLA then you got to make some noise!