Gold HTC One price is a monster 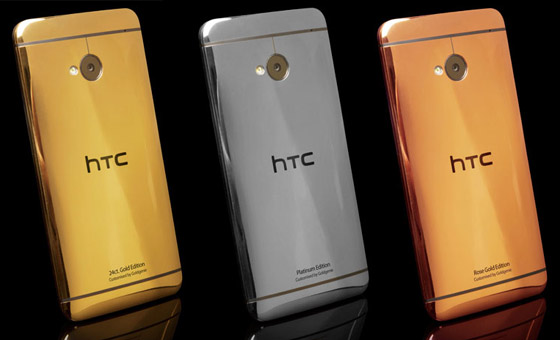 Going ultra premium is the gold HTC One that we’ve just witnessed on Goldgenie’s official site. This HTC smartphone is now being sold by the company in two different avatars apart from the one we’ve mentioned – platinum and rose gold. And as one would expect, these phones come slapped with mega retail prices that start from £1,895. Just to be clear here, they have been coated with 24ct gold on their bodies.

We’ve seen the company unveil a number of such products lately, prime among them being gold versions of the Samsung Galaxy S4 and the BlackBerry Q10. And for its newest makeover, the 32GB version of the HTC One has been chosen. Of course however, internal components of the phone haven’t been toyed around with.

It houses a 4.7-inch 1080p display which provides a pretty spectacular pixel density of 461ppi, as we’ve pointed out in our review of it. Sized at 137.4mm x 68.2mm x 9.3mm, it tips the scales at 143 grams. But these aspects of the stock HTC One are bound to change with the gold-plated units. The phone employs the Android Jelly Bean OS, and relies upon the latest version of the company’s Sense software for its user interface.

Another superb addition to the HTC One is its Ultrapixel camera which produces impressive low-light images owing to its advanced sensor. Underneath its hood lays a Qualcomm Snapdragon 600 quad core processor which has been clocked at 1.7GHz. This chipset is assisted in its operations by 2GB worth of DDR2 RAM. Furthermore, its Blinkfeed feature is a highlight as well, with its ability to display users’ social feeds in a neat and handy manner.

Coming back to the customized One model, it can be noted that its starting price of £1,895 applies to its gold version, whereas its rose gold edition priced at £1,995. Lastly, those wishing to purchase its platinum variant will need to shell out £2,095. All these phones will be SIM-free and unlocked for any network from around the world.