Gmail users are getting spam email from themselves 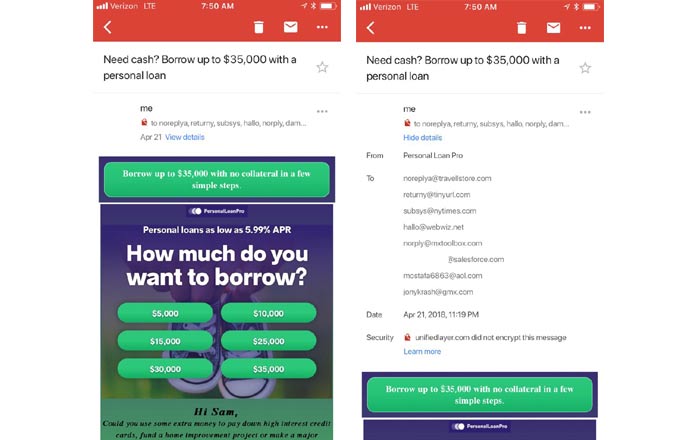 A strange phenomenon has overtaken Gmail, with people mysteriously finding the same spam mail in their inbox and sent folders even though they never sent them. Naturally, most of them believed that their account had been hacked, in spite of protections like two-factor authentication. However, changing their password didn’t help matters at all.

Affected users eventually took to Google’s Gmail Help Forum to ask for solutions. One such person claimed that his account had sent out 3 spam emails in the space of an hour to 10 unknown email addresses, covering topics such as weight loss and growth supplements for men. He made up a new password, but it happened again and again.

These mails only disappeared once he had marked them as spam. His story was echoed by many others as well. Several of the emails appear to have been sent via Canadian telecom company Telus. The firm later clarified that these messages were just disguised to appear as if they were coming from it, so it seems the hackers were using the name to get past spam filters.

Google later chipped in as well, stating that this was all part of a spam campaign. The attackers basically forged email headers to make it appear as if people were getting emails from themselves. Gmail noticed this and automatically placed these missives in their sent folder.

Thankfully, Google has begun reclassifying these emails as spam. Nobody’s account actually got compromised in this whole mess, but it’s still creepy that these scammers were able to wreak such havoc.