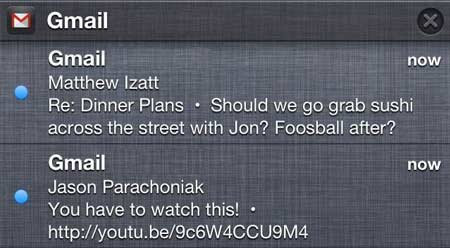 The guys over at Mountain View have paid heed to requests from users of the Gmail for iOS app and have released updates for the same. Besides improving the login experience and letting subscribers forward messages from an alternate email address, the application has been included with full notification center support, reveals the official Gmail blog.

This Gmail app has finally been integrated into the notification center to keep users in the loop at all times. It now supports alerts as well as banners and even comes with lock screen option. Additionally, the search engine giant has also made notifications as much as five times faster with the update.

“Our team has been working hard to bring your most-requested features to the Gmail app for iOS. Today, we’re excited to add three new improvements to that list of updates: full notification center support, the ability to send messages from your alternate email addresses and an improved login experience,” reads a post by Jason Parachoniak, Software Engineer on the official Gmail blog.

And as mentioned above, the option to send an email from alternate Gmail id has been incorporated in the iOS version. But this is possible only if the user has configured the settings and added the alternate sender addresses through a desktop. Improvements to the login process have resulted in the app allowing subscribers to stay logged in, until they themselves decide to sign out of the account.

The Gmail for iOS app is available for download through the Apple App Store, free of charge. The upcoming updates to the application may include support for multiple accounts.