Kickstarter looks set for another record-breaking product to land on it, for Avegant’s virtual retinal (not reality) head-mounted display will soon be making its way onto the crowd-funding site in the form of Glyph. This device will have its base price set at $499, and will be put up on Kickstarter on January 22, 2014.

According to Engadget, this final version of the product will kick in sport integrated noise-canceling headphones as well. It has been designed in such a way that the display appears in a flip-down manner, allowing you to use it either as a virtual retinal screen or as headphones. Glyph will be making its debut at next year’s Consumer Electronics Show at Las Vegas. 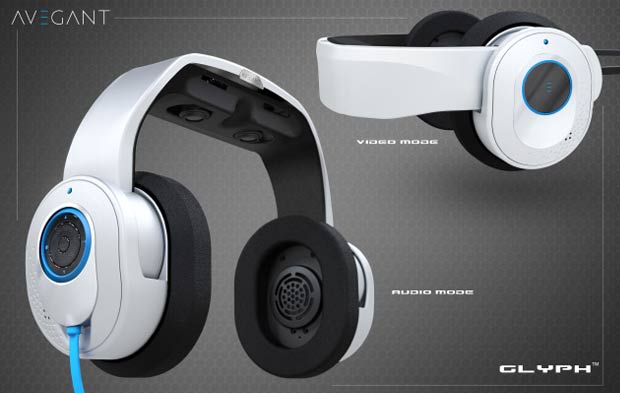 Avegant is the company responsible for the product which has emerged from a prototype the above mentioned website had got to get its hands on a while back. It concept is bit different from that of other VR devices in the sense that this virtual retinal display projects directly into each eye with the help of an array of two million micromirrors.

This is akin to how we fundamentally see things around us. And hence, the results it provides are sharp definition and realistic, even with low-resolution sources. Glyph will be usable for everything from viewing smartphone content like with Google Glass to watching movies and playing video games. And that fact that it has its own headphones strapped onto it adds a lot of convenience to the whole affair.

The Glyph virtual retinal display headset looks like quite interesting a product, and hence its Kickstarter campaign which starts on January 22 has ‘funded’ written all over it.