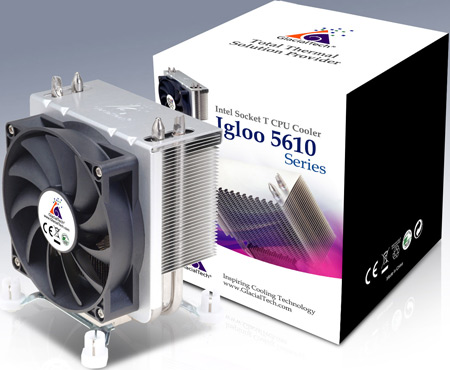 Both of these coolers have a unique design that incorporates a specially aligned aluminum heatpipe combination of two pipes that dissipates the heat from the CPU directly into the heatsink fins. From there, the Silent version’s fan quietly and efficiently brings the temperature down.

The Igloo 5610 PWM version on the other hand has an adjustable speed fan that brings the temperature down according to the user’s needs. The fan ranges in speed from 800~3200RPM, with a maximum volume throughput of 51.3CFM.

The Fan puts out 34dB maximum at full revolutions. The entire heatsink (both versions) keeps a relatively low profile and only weighs in at 373grams (Well within Intel’s safe CPU specification of 550 grams for a CPU cooler).

When using resource hungry applications and you have the PWM version installed, turn up the RPM to 3200 to manage your heat dissipation more effectively. While the PC is in idle or doing non-intensive work, turn the RPM back to 800. In this way you manage your power consumption, your decibels and your overall peace of mind. Alternatively users have the option to purchase the Silent version.