Give One Get One OLPC Program Extended Till December 31 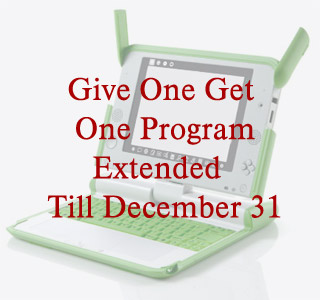 One Laptop per Child (OLPC), a non-profit organization dedicated to providing every child in the world with access to the Internet, has announced that it is extending the ‘Give One Get One’ program offer till December 31. Hence more people are expected to participate in this program.

The Give One Get One program was launched on November 12 in the US and Canada. Under this program individuals who buy an XO laptop will pay double the price i.e. US$399 and buys two laptops. Buyer gets one laptop, while the other is donated to children in countries like Afghanistan, Cambodia, Haiti, Mongolia and Rwanda.

“In the past 10 days, we’ve experienced an outpouring of support from the public that is truly gratifying and encouraging,” said Nicholas Negroponte, founder and chairman of One Laptop per Child.

“Because so many people have asked for more time to participate either individually or in order to organize local and national groups to which they belong, we have decided to extend Give One Get One through the end of this year. During this extended period we will solicit input and transition to a program of giving only at the beginning of 2008. We want as many people as possible to have the opportunity to act upon the giving spirit of the holiday season,” Negroponte added.

To encourage people to participate in Give One Get One program, the amount of $200 Give One Get One contribution has been declared as tax deductible as a charitable donation. Also, donors will get one year of complimentary T-Mobile HotSpot Wi-Fi access at more than 8,500 locations throughout the United States.

So far, the Give One Get One program is gathering an average of US$2 million daily.