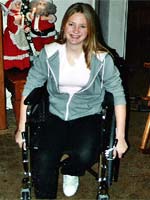 A 16-year-old California girl, who lost a leg in an accident, has had her artificial limbs stolen for the second time in a span of just three months.

Melissa Huff, an Arcadia High School student who uses a $16,000 prosthetic limb to play softball for the school team and another one, valued at $12,000, for everyday use, said both were taken from her bedroom on Tuesday.

In an interview Huffs said, “I was picking up my little brother from school when my mom called me and asked where I left the two prosthetic legs.”

“I knew right then that it had happened again.”

Lisa Huff, her mother, said she came home around midday on Tuesday and found the room shared by Melissa and her older sister a mess. Only the prosthetic limbs were missing.

Police say they were enquiring from the girl’s friends, neighbours and relatives for information about the missing legs.

In November, thieves broke into the Huff residence at Los Angeles suburb of Temple City, and took just her prosthetic limb. After that incident, Melissa’s prosthetist and a local real estate company donated about $16,000 for a new limb.

The stolen limb was found in the teenager’s backyard about a month ago, apparently thrown there by the thieves.

“Now, she has nothing to walk with,” said her father, David Huff.

Melissa was going to be back in the field this week, her mother said.

Melissa said she intends to get back on the field this week and just practice throwing until she gets another prosthetic limb.

Melissa lost her real leg two years ago when a driver accidentally ran into her as she stood in front of her middle school.