Gionee’s upcoming Marathon M4 to boasts of a 5000mAh battery

Gionee likes to take things up a notch with its mid-range offerings once in a while, and one of its upcoming devices named Marathon M4 is aiming to do just that. This smartphone has been equipped by the Chinese company with a massive 5000mAh battery.

This power pack is good enough to offer up to 65 hours of talktime and up to 463 hours of standby time. According to a teaser image released by the company through its Facebook page, the Gionee Marathon M4 also boasts of 4G LTE support which has become a necessity these days.

As can be seen in the picture, the capacitive keys at the bottom of the device are identical to the ones present in the Lollipop version of Android, which tells us that it will run the said OS. Moreover, Gionee has also mentioned that it will grab a metal design. 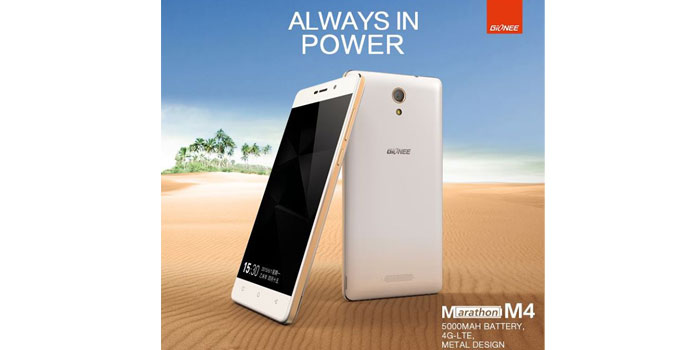 According to Phone Arena, the Marathon M4 will boast of a 5-inch 720p display, making it quite fit for the Indian mid-range market. 1.5GB worth of RAM forms part of the device apparently, while its camera setup includes an 8MP rear camera and a 5MP front one.

Prior to this smartphone, Gionee had released the Marathon M3 which too offers a 5000mAh battery. Owing to this power pack, the handset is able to deliver up to 32.8 days of standby time and up to 32.46 hours of 3G talktime on a single charge. Moreover, when on 2G networks it boasts of granting up to 51 hours of talktime in total.

There’s no particular date on which we can expect the Gionee Marathon M4 to be unveiled, but we’ll keep a tab on all the details regarding the device. So stay tuned for more.