GETAC PS535E Fully Rugged Handheld PDA announced in the US 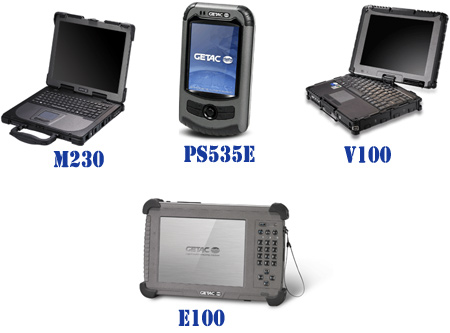 GETAC, a manufacturer of rugged computers has announced its PS535E Rugged PDA in the US. It will be showcased along with other GETAC PDA models during the ESRI Worldwide Business Partner Conference.

The fully rugged PS5335E handheld PDA is actually a combination of a GPS and PDA device that not only performs well, but also protects the user’s data while on field. It also features a 3.5-inch transflective sunlight readable display.

The connectivity features of GETAC’s PS535E PDA include Wi-Fi, embedded GPS and Bluetooth. Another salient feature is its battery life of 8 hours.

Other GETAC devices set to be on display this week include the newly introduced E100 tablet, the M230 laptop and the convertible V100. Read on to know more about these products.

The GETAC E100 is a rugged tablet PC that weighs just 3 pounds and is able to withstand dirt, dust, water, motion, vibration and temperature. This tablet sports an 8.4-inch TFT SVGA transmissive display with an integrated touch screen panel. Or, you could also go in for an optional Ultra-Bright sunlight-readable display and 800 Nit Backlit LCD screen

The GETAC M230 fully rugged notebook offers high performance in an ultra-portable slim design. You can go in for a 14-inch XGA or a 15-inch SXGA TFT LCD high resolution display. Other options include an ATI M54 chip for additional graphics processing power, extra storage up to 120GB and the ability to incorporate a number of plug-ins.

Last up is the GETAC V100 Fully Rugged convertible PC sports an LCD screen that transforms from a notebook into a tablet PC. It sports a 10.4-inch screen and features integrated Bluetooth, a reversible waterproof camera and a full menu of wireless networking capabilities.