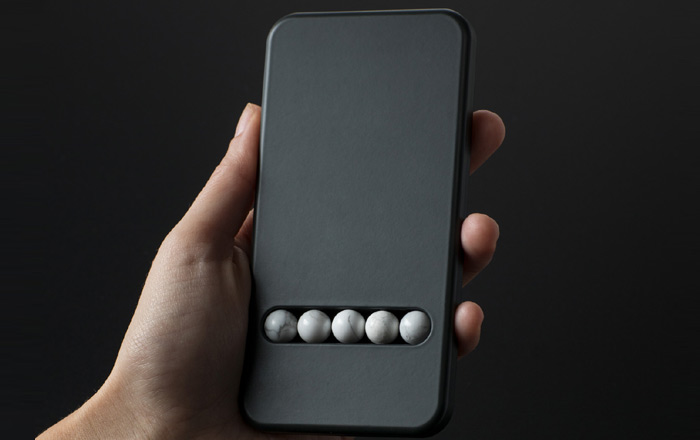 Smartphone addicts who can’t stand being away from their beloved devices but want to stop feeding their impulses now have a way to curb their habit. It’s called the Substitute Phone and it does exactly that, replicating the feel of digital handsets with an offline slab of plastic which features a row of balls in a line.

The Substitute Phone is the result of designer Klemens Schillinger’s efforts as part of an exhibition called #Offline – Design for the (Good Old) Real World. He intends for it be a kind of therapeutic device, calming smartphone junkies who just want to feel like they’re holding a handset in their hands.

To be clear, the Substitute Phone can’t actually do anything other than imitate the feeling of scrolling, swiping, and zooming. It’s similar to a fidget spinner in that way, occupying the hands as a replacement for another activity. Schillinger’s made 5 models for different purposes.

He thinks the limitation helps phone addicts cope with their withdrawal symptoms. The object is made out of black polyoxymethylene (POM) or acetal plastic, a heavy sort of material which is meant to duplicate the weight of standard handsets. The little beads are created using the natural stone Howlith.

It’s an interesting premise, but people can probably come up with their own coping mechanism instead of resorting to a useless hunk of plastic. Besides, it doesn’t even appear to be for sale right now, so who knows whether it would actually help someone who can’t stay away from their device.