Get a Free iPhone 3G via O2, with Strings attached of course 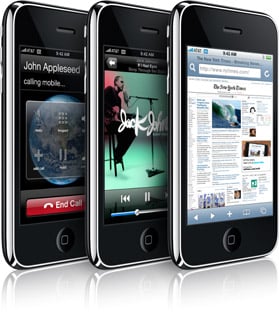 The iPhone 3G launch is perhaps one of the biggest happenings in the world of technology in the year 2008. Lots had been spoken, rumored and speculated about the next gen iPhone months before its official launch. And it’s needless to say that something that’s already under the spotlight months before its launch is sure to hog all the limelight once it’s officially rolled out. And none can dispute this. So perhaps for the next week or two you could expect an iPhone 3G related news perhaps every other day!

And we stick to our word and bring you one right away.

The phone which has been launched in 70 countries supports wireless carriers’ faster 3G cellular networks. Apart from the USPs of 3G capability and GPS satellite positioning, the other thing that makes the latest iPhone version truly enticing for purchase is its pricing. Yes, at $199 (8 GB) and $299 (16 GB), the iPhone 3G is quite a steal for sure.

Coming back to O2’s new attractive offer, O2 subscribers who choose service plans costing either $88 or $146.50 a month would get the 8 GB version of the iPhone 3G at no extra charges. To get a 16 GB version of the iPhone at no charge users would have to go in for a more expensive subscription plan. For businesses, O2 is in the works of offering the iPhone 3G smartphone at no charge for companies on a 24- or 36-month contract.

The latest iPhone is set to be launched in 22 countries on July 11 and the other countries would follow in the course of the year. Now coming to the lucky 22 early birds, O2 plans to start offering the new iPhone on the same release date that has been set by Apple for its new 3G-capable phone.