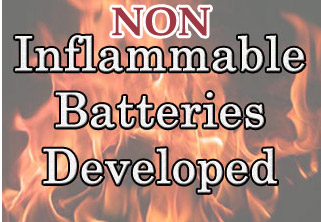 Mobile phone battery is always a matter of concern as cases of battery explosions are increasing. As a remedy to it, German scientists at Fraunhofer Institute for Silicate Research ISC have developed a lithium-ion battery, which is non-explosive.

This newly developed battery is based on a polymer electrolyte, which is non-flammable unlike liquid electrolyte in conventional cell phone batteries.

The polymer used in the battery is derived from Ormocer group of substances – a compound with silicon-oxygen chains that forms an inorganic structure to which organic side chains become attached.

“We have succeeded in replacing the inflammable organic electrolytes with a non-flammable polymer that retains its shape,” said ISC team leader Dr. Kai-Christian Möller. “This considerably enhances the safety of lithium-ion batteries. What’s more, because it is a solid substance, the electrolyte cannot leak out of the battery.”

Researchers will present their work at Hannover Messe happening on April 21 to 25. However, it will take 3-5 years to incorporate such inflammable batteries in mobile phones.