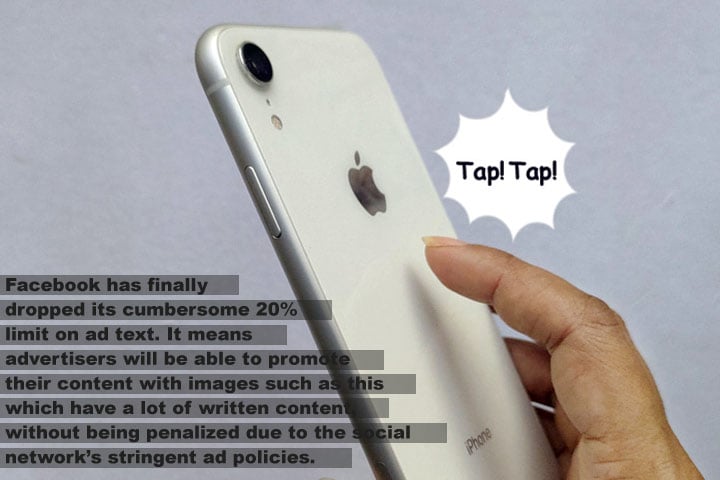 Facebook has discreetly removed the rule that limited text space on ad images to only 20 per cent. It means that the social networking giant will not penalize ads with more image text on them.

Facebook had a ‘text overlay’ tool for advertisers to ensure that text did not take up more than 20 per cent of their ads.

As shared by social media expert Matt Navarra, Facebook is contacting advertisers to inform them of the update.

“BIG news for Facebook advertisers. Facebook is killing its ‘< 20% text in image’ rule for ads,” he tweeted recently.

Facebook said that it “will no longer penalize ads with higher amounts of image text in auctions and delivery”.

“We will begin gradually removing external material and sources that indicate that we enforce high levels of text in images,” the social network added.

Earlier, the ‘text overlay’ tool by Facebook checked if the ad aligned with the 20 per cent restriction or not.

“To create a better experience for viewers and advertisers, ads that appear on Facebook, Instagram, and the Audience Network are screened based on the amount of image text used in your ad,” read the earlier Facebook rule.

“Based on this review, advertisements with a higher percentage of image text may not be shown. Please note that exceptions may apply to certain ad images. For example, exemptions apply to book covers, album covers and product images”.

Facebook, however, said that advertisers are still encouraged to reduce the amount of text with images.

“We have found that images with less than 20 per cent text generally perform better,” it said.