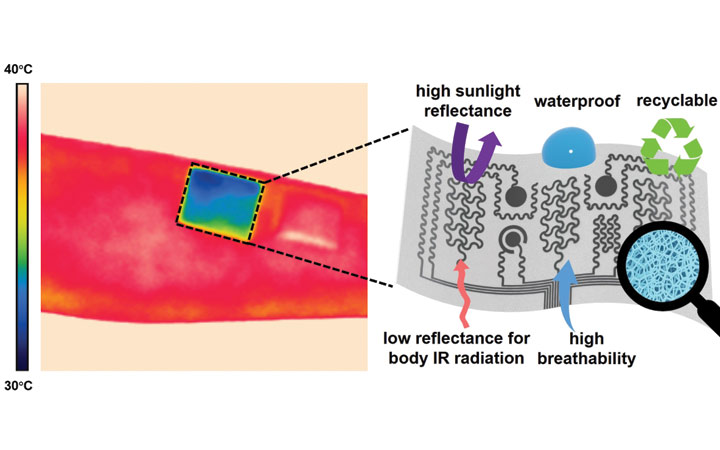 Wearable air conditioning is in the offing as engineers from the University of Missouri-Columbia have designed an on-skin device that includes numerous human health care apps such as the ability to monitor blood pressure, the electrical activity of the heart and the level of skin hydration.

Unlike similar products in use today or other related concepts, this breathable and waterproof device can deliver personal air conditioning to a human body through a process called passive cooling.

Passive cooling does not utilize electricity, such as a fan or pump, which researchers believe allows for minimal discomfort to the user.

One day, soldiers could cool down on the military battlefield – preventing heat stroke or exhaustion – by using “wearable air conditioning”, said the study detailed in the journal Proceedings of the National Academy of Sciences.

“Our device can reflect sunlight away from the human body to minimize heat absorption, while simultaneously allowing the body to dissipate body heat, thereby allowing us to achieve around 11 degrees Fahrenheit (-11.6 degree Celsius) of cooling to the human body during the daytime hours,” said Zheng Yan, assistant professor in the College of Engineering.

“We believe this is one of the first demonstrations of this capability in the emerging field of on-skin electronics,” Yan added.

Currently, the device is a small wired patch, and researchers say it will take one to two years to design a wireless version.

They also hope to one day take their technology and apply it to ‘smart’ clothing.

“Eventually, we would like to take this technology and apply it to the development of smart textiles,” Yan said.

That would allow for the device’s cooling capabilities to be delivered across the whole body.

“Right now, the cooling is only concentrated in a specific area where the patch is located. We believe this could potentially help reduce electricity usage and also help with global warming,” the authors wrote in the study published in Proceedings of the National Academy of Sciences.

Funding for the study was provided by the University of Missouri start-up fund and a grant from the Air Force Office of Scientific Research.