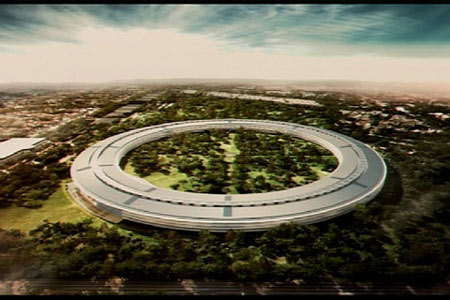 Apple sure knows how to keep audiences entertained even when it isn’t making noise for product launches. At least that’s what the scenario looked like when Steve Jobs presented a proposal to develop a new corporate campus to the Cupertino City Council. Potential designs revealed a main spaceship-like building prevailing on the campus.

The video up on the Cupertino.org page sees Steve Jobs mentioning that “Apple is growing like a weed. It’s clear we need to build a new campus.”

The new office will comprise of a four-storey building completely curved in tailoring and should gain power from a natural gas energy center within the campus premises. Obviously, all this is going to be one expensive affair. A conventional power grid will be employed for backup on the 150-acre campus.

The plan also includes restructuring of the landscape so as to accommodate at least 6,000 trees. The proposed structure certainly looked sleek and chic. Jobs intends to have the building ready by 2015 and if everything goes as anticipated, it should be able to house more than 12K employees.

“Cupertino is ready for this,” Cupertino Mayor Gilbert Wong responded at the press conference. “The Mothership has landed in Cupertino.”

The present Pentagon building is known to be the largest office building in the world, at least going by the floor size. We’ll have to wait and watch to see just how the upcoming project turns out. But one thing’s for sure it’s going to be apricot and not apple orchards on the new campus!