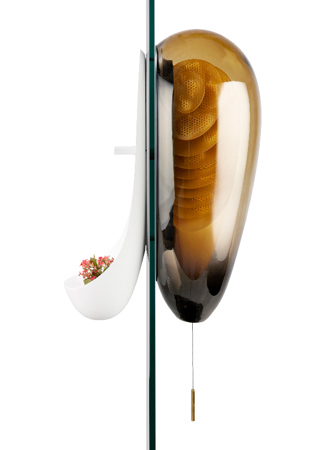 The Philips urban beehive concept which has been making the news lately, aims to bring fresh honey right to users’ living rooms along with providing a constant supply of this golden syrup. It looks like the electronics giant has been busy meddling around with traditional methods and a modern setup to deliver this concept as part of its ‘Microbial Home’ design project.

One portion of this device consists of a flower pot and an entry passage that will be on the outside of the construct. The second part features honeycomb frames encased in a glass vessel that will hang inside. These frames will be complete with a honeycomb texture, providing the resident bees with the required environment to build their wax cells.

Taking a cue from traditional methods the apparatus incorporates a smoke activator so users don’t enrage the bees when collecting honey from the pod. The activator allows releasing smoke into the comb to calm the bees before the honey is collected. This design also intends to preserve these species considering the decline of bee colonies around the globe over the years. So, beehives being nurtured in cities and in people’s very apartments may probably become possible with the Philips beehive concept. 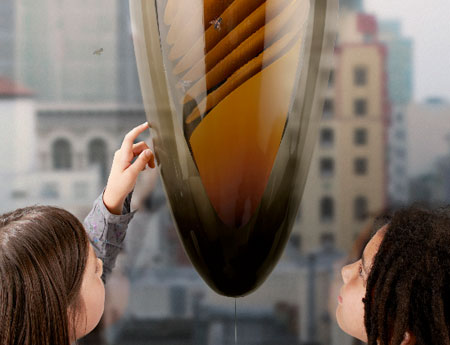 The bees can move from the flower pot to the hive and vice versa, which is designed to result in pollination. The set up does sport a very contemporary look, meaning it can sit pretty in modishly decorated apartments. And what’s more, the glass shell permits keeping a watch on the activities that these little critters undertake on a day-to-day basis.

If the Philips urban beehive doesn’t appeal to folks, there are always those supermarkets to make a beeline for.