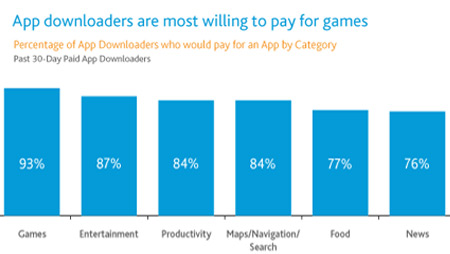 Nielsen Wire’s latest research has it that people are more willing to shell out the change for gaming apps as compared to any other app category. Still wondering why EA may be willing to bet over $1 billion on PopCap Games?

93% of respondents were apparently not opposed to the idea of forking out cash for games, as pitted against the 76% who said they were willing to pay for news apps. Additionally, BlackBerry and feature phone users tend to play pre-loaded titles, while those who wield iPhone, Windows Phone 7 and Android handsets are most likely to have downloaded the games played.

The regular mobile gamer spends about 7.8 hours a month on gaming, according to the figures. On the other hand, iPhone and Android owners pass away 14.7 hours and 9.3 hours, respectively, on the said activity. The percentage of downloaders ready to pay for entertainment, productivity, maps/navigation/search and food apps read at 87%, 84%, 84% and 77%, correspondingly.

This Nielsen survey takes into account smartphone users who have played a game on their mobile devices over a span of 30 days.