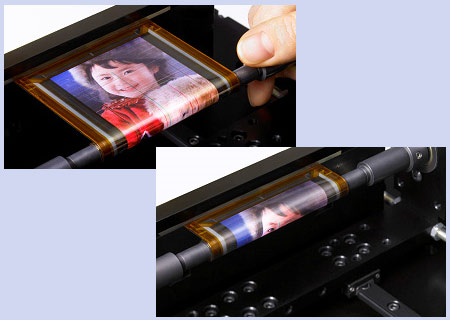 Flexible displays probably rank high among some of the undeniably cool technologies that gadget buffs would like to see employed in consumer electronics. Sony has engineered an extremely flexible 80 μm-thick 4.1” 121 ppi OTFT-driven full color OLED display which can be rolled around a thin cylindrical object.

OTFTs with a PXX derivative that boasts of accommodating around 8 times the present modulation of conventional OTFTs were developed by Sony in order to create this display. The combined integration technologies of OTFTs and OLEDs on a 20 μm-thick flexible substrate and organic insulators for all the insulators fitted into the incorporated circuit was employed in the development of this panel.

The PXX derivative used in this display remains stable under exposure to oxygen, moisture, heat and light. The OLED panel offers a resolution of 121 ppi and 432 x 240 x RGB (FWQVGA) pixels. With the exclusion of rigid driver IC chips and amalgamation of a gate-driver circuit with OTFTs, the display lent its roll-up capability.

Sony’s flexible OLED panel can be rolled-up around a cylinder with a radius of 4 mm. It has been tested to be capable of reproducing moving images without any apparent degradation in its abilities even after 1000 cycles of repeated rolling-up and stretching of the display. The panel delivers a contrast ratio of over 1000:1, more than 100 cd/m² of peak luminance and 1,67,77,219 colors.

No word has emerged on when these displays will actually be employed in consumer products, though Sony plans to unveil the results of this development on May 27 at the SID 2010 International Symposium.