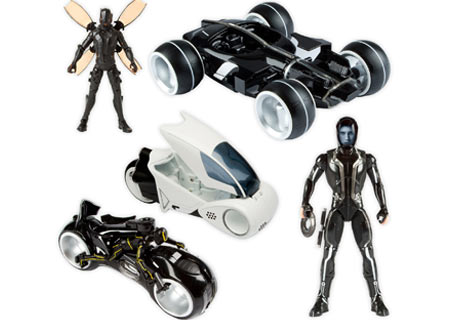 Movie buffs eagerly awaiting the release of 3D high-tech adventure film Tron: Legacy can now get a taste of all the excitement entwined within the film even before it enters cinemas worldwide this December. Disney Consumer Products has unveiled the fall line-up of Tron: Legacy inspired toys. The extensive offering claims to unleash the first-ever action figures to include impulse light projection technology.

The latest line-up is expected to not only get little children excited but also have adults rushing into stores in order to acquire the upcoming inclusions. All the Disney’s Tron: Legacy toy products portray the movies characters and themes to the tee. The action figures and vehicles offered within the enticing array possess an eye-popping technology, sleek appearance while also having the ability to light up.

“Tron: Legacy is a cutting-edge film with a unique futuristic feel, and we wanted to create products with new technology and high-end design that live up to what you will see on screen,” commented Chris Heatherly, VP of toys and electronics, Disney Consumer Products. “This is not a typical movie line. We’re working exclusively with trailblazers who normally do not do movie merchandise, but they believed so passionately in Tron that they jumped at the chance to help us make great products.”

The new Tron: Legacy action figures come complete with impulse projection technology. With this inclusion, digitized moving faces are projected onto the helmet, just as seen in the film. Movie enthusiasts can expect 7.5” figures and a 12” Ultimate Sam Flynn figure. The characters also dish out phrases plucked right out from the Tron: Legacy movie.

Besides offering intuitive action figures, there are also exciting vehicle offerings. These include Tron Core and Deluxe vehicles which are noted to be replicas from Tron: Legacy. When a character is merged with the vehicle, they both illuminate. The Deluxe model boasts of launching projectiles, pop-up air brakes, tri-color light changes and gravity tilt sounds; all features emulating their namesakes in the movie.

The Tron Zero Gravity Light Cycle includes huge six-foot light-emitting trails along with legendary Air Hogs technology. Thanks to this inclusion, the vehicle can be driven upside down or even on a wall without falling.

The prices of the Tron action figures range from $15 to $40 while the Tron Core and Deluxe vehicles are priced at $14.99 and $19.99 respectively. The Tron Zero Gravity Light Cycle can be picked up for a cost of $34.99. All these items can be seen riding into stores by fall this year.