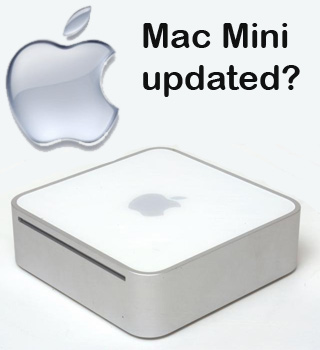 The most recent buzz to stir the web terrain is the supposed revamping of Apple’s Mac Mini. Expected to launch at the Macworld, if TUAW is to be believed then the updated Mac Mini will supposedly be dressed in an aluminum and iMac black plastic and will come with a lip like Time Capsule along with added functions.

The Mac Mini will apparently boast of SATA internal optical drives and hard drives. There is a high probability that customers will be given an option of build-to-order. Thus users can move out the optical drive and use a second hard drive instead.

The inclusion of a second hard drive should particularly satisfy business users as they can easily mirror RAID1 as well as get additional storage. The lip like design of Mac Mini is apparently to help efficient cooling of the device.

Other rumored changes include the incorporation of NVDIA chipsets, Mini DisplayPort and 4GB RAM. If the Mac Mini does undergo the rumored changes, then users will not only get an additional drive for backup on RAID, but they can also get their mini computer to act as a server.

The new generation Mac Mini is expected to launch at the MacWorld Expo in San Francisco sometime around next week.