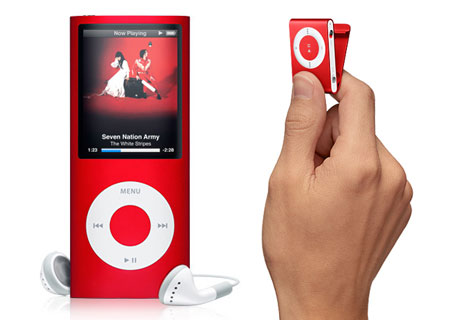 Apple’s iPod Shuffle is into serious philanthropy this Christmas as Apple has announced Red – Special Edition shuffle for AIDS Fund in Africa.

The new iPod Shuffle Red Special Edition will come in a bright red aluminum enclosure which you can proudly flaunt as the color means the cause you will be supporting by purchasing the special edition of Shuffle.

Red is a movement that people can join by simply purchasing the products and services and fund the anti-AIDS medications in Africa. The movement contributes a part of the purchase to the Global Fund to fight HIV/AIDS in Africa. People can also join the movement by visiting www.joinred.com.

Supporting the cause, even Dell had launched the Red branded Studio Artwork laptops in the month of November.