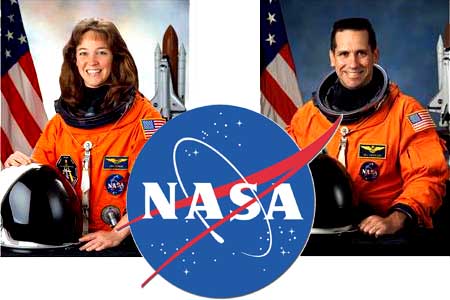 Greek philosopher Aristotle once said, “Love is composed of a single soul inhabiting two bodies”. However, in the case of Cmdr. Bill Oefelein, it turned out to be a single soul in three bodies. He was involved in a love triangle with Lisa Nowak as well as Capt. Colleen Shipman. NASA has now stated that Oefelein will now leave them and head back to the Navy.

Lisa Nowak was also asked to leave NASA as she faced attempted kidnapping and assault charges. The controversy exploded when Nowak drove more than nine hundred miles through five American states to confront her romantic rival, Colleen Shipman. In fact, she even wore an astronaut diaper so that she would not have to stop the car for a toilet break.

She went all the way from Houston to the Orlando International Airport parking lot, where she pepper-sprayed Shipman in an attempt to get the lady to talk with her. She was wearing a disguise and had bought a gun, knife medical rubber tubing and garbage bags. Nowak was charged on February 6, 2007 for her actions.

However, NASA has not officially stated the reason why Bill Oefelein is leaving. Kylie Clem, a spokeswoman at NASA’s Johnson Space Center in Houston said, “The Navy and NASA have mutually agreed to end his detail to NASA. Cmdr. Bill Oefelein has completed his assignment as the pilot of shuttle Discovery on an International Space Station assembly mission in December and would be returning to the Navy.”

Oefelein had admitted that he was in a romantic relationship with Lisa Nowak but had broken off with her as he started seeing Capt. Colleen Shipman. Nowak too works with the Navy while Shipman is stationed at Patrick Air Force Base. There is a chance that Oefelein and Nowak could face court-martials for cheating on their spouses.