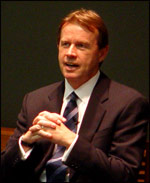 On Monday Dell announced its plans of adding 5,000 jobs in India over the next two years, making its work force in the country to 15,000.

Texas-based Dell is also planning to set up a manufacturing center in India, a step that could help enhance the sale of Dell computers here, President and CEO Kevin Rollins told reporters after a meeting with Indian Prime Minister Manmohan Singh.

Computer maker Dell Inc. will hire 700 to 1,000 workers for a new call center in Gurgaon, a satellite town of the capital, New Delhi, Rollins said. He added said that the new call center, the company’s fourth in India, will open in April.

The other new hires will staff call centers in the cities of Bangalore and Hyderabad in southern India and Mohali in the northern state of Punjab. In 2006 itself, the company also plans to double the staff at its product testing center in Bangalore, which currently employs 300 engineers, Rollins said.

During his previous visit to India in April 2005, Rollins had said Dell would make India a center for its software development and back-office work.

At present the company has three call centers in India, a product testing center for corporate customers and a global software development center. Some 10,000 people are employed at these facilities.

Scores of Western companies have been cutting costs by shifting software development, engineering design and routine office functions to countries such as India, where English-speaking workers are high in number and the wages are low.

However Rollins said that his company’s growth plans were not limited to tapping the talent, but also benefit from the growing demand for desktop computers and notebooks.

Dell accounts for less than 4 percent of the 4 million computers sold in India, whereas the company’s share in the global market is about 18 percent, he said.

Taxes levied by the Indian government on computers and computer parts are a major factor affecting pricing of Dell products and their sluggish sales here.

A manufacturing facility could help the company improve its position in India, where computer sales are expected to increase to 10 million annually over the next three to five years.

Rollins said, “We have come to the conclusion that time is ripe to consider a manufacturing facility in India.” He added, “We want to do it fast,” he said, but gave no time frame or investment details.

According to him the company was talking to local authorities in several Indian states to identify a site and a decision will be made soon.

At present Dell operates nine plants, of which six are outside the United States.