TechShout
Home General Man kills Self and Nephew due to Hiccups 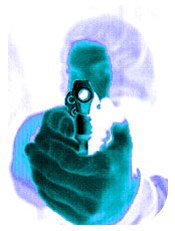 On Tuesday, the police in the Caribbean port city of Barranguilla said that a Colombian man accidentally shot his nephew to death while trying to treat his hiccups by pointing a revolver at him to scare him.

The incident took place on Sunday night while the two were having drinks with neighbours.

Rafael Vargas, 35, first accidentally shot his nephew David Galvan, 21, in the neck. Seeing what he had just done the hysterical Vargas shot himself and commited suicide thereafter, the police said.

Witnesses told local television Galvan, a university student, started to hiccup and Vargas, who works as a security guard, claimed that he would use the home remedy for hiccups of scaring him. He pulled out his gun, pointed it at Galvan and it accidentally went off.

One witness interestingly added, “They were drinking but they were aware of what was going on.”