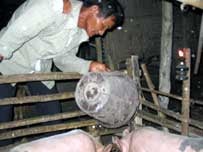 A Vietnamese man in central Quang Nam province has not slept for the past 33 years, and surprisingly he has never even fallen ill after over three decades of insomnia.

His inability to sleep has not only made him famous, but also represents a “miraculous” phenomenon worthy of scientific study.

Sixty-four-year-old Thai Ngoc, known as Hai Ngoc, said he could not sleep at night after getting a fever in 1973, and has counted infinite numbers of sheep during more than 11,700 consecutive sleepless nights.

Ngoc said, “I don’t know whether the insomnia has impacted my health or not. But I’m still healthy and can farm normally like others.”

Proving his health, the elderly resident of Que Trung commune, Que Son district said he can carry two 50kg bags of fertilizer down 4km of road to
return home every day.

His wife said, “My husband used to sleep well, but these days, even liquor cannot put him down.”

“I have tried sleeping pills and Vietnamese traditional medicine but nothing helps, even to sleep for a few minutes,” he said.

Ngoc’s wife dais that when he went to Da Nang for a medical examination, apart from a minor decline in liver function, everything else was claimed to be absolutely normal by the doctors.