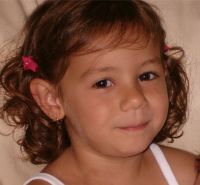 The Winter Olympics has an Italian bus driver signed up with them not for employment or for interest of the event but for the search of his missing daughter.

Denise Pipitone vanished in September 2004 while she was playing in the street outside her house. After immense attempts of searching her, Denise’s father Pietro Pullizzi signed up as a bus driver at the Winter Olympics, in the hope of meeting foreign visitors and journalists who could help find the missing girl.

Banners with pictures of Denise Pipitone, when she was almost four years old, hang from fences and buildings at several mountain venues for the Games.

Denise’s father, Pietro Pulizzi, went further and left his home town of Mazara del Vallo on the southern Italian island of Sicily for the icy slopes around Turin in the hope of finding new clues.

La Stampa newspaper wrote he was driving the coach bringing visitors to the Bobsleigh track at Cesana, and had stuck a photo of Denise to the windshield, hopeful that the media spotlight on the Games and flow of visitors would help him.

“I thought that at the Olympics there are many tourists and foreign journalists and maybe one of them has seen Denise without knowing who she was,” the newspaper quoted Pulizzi as saying.