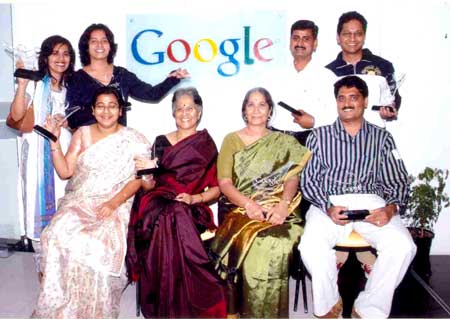 Google India finally and more importantly officially announced the winners of Google Wordmasters 2006, the creative writing contest, that was designed to identify and of course celebrate India’s top talent in the field of English writing.

Vamsi Krishna Nakkina won the first place in the Google Wordmasters writing contest, and has received a creative writing course from a reputed university abroad, as well as a cash prize of Rs.100000.

All the ten finalists were invited to visit he Google Hyderabad office, where they could meet the team and explore Google’s dynamic working environment.

“Google Wordmasters 2006 India was a platform to identify and celebrate India’s top English writing talent and we are thrilled with both the response and the quality of talent we have seen” said Roy Gilbert, Director Online Sales and Operations, Google India. “At Google, our users, customers and partners expect high quality communication and we hope that such contests will provide further opportunities to attract strong writing talent to Google.”