TechShout
Home General Oracle Corp. to Cut Off around 2,000 Jobs 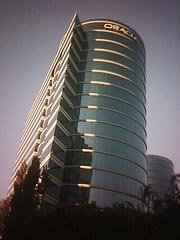 Oracle Corp. on Thursday announced that in order to dig for bigger profits from its recent $5.85 billion takeover of Siebel Systems Inc., it will be reducing around 2,000 jobs, or more than 3 percent of its work force.

During a conference call Chief Executive Larry Ellison said that Oracle inherited 4,700 Siebel workers in the attainment, but most of the cuts will be concentrated among employees on the company payroll before the deal closed last week.

Around 90 percent of Siebel’s customer support, engineering and sales staff is being retained, Ellison said.

Once the removal is done, Business software maker Oracle will employ about 55,000 workers worldwide, according to Safra Catz, Oracle’s chief financial officer. The cost cutting should lower Oracle’s expenses by at least $400 million annually, Catz said.

Redwood Shores, Calif.-based Oracle Oracle already has handed out pink slips to some of the affected employees and expects to complete most of the layoffs during the next few weeks, spokesman Bob Wynne said.

The job cuts fell within the range projected by industry analysts nearly five months ago when Oracle first announced plans to buy Siebel, a once-bitter rival that had been stalled in a deep sales slump.

Apart from providing details about the reduction, Oracle also lowered its profit projections for the rest of its fiscal year. Excluding acquisition charges and other expenses unrelated to its continuing business, Oracle expects to earn 18 cents per share during the current quarter, a penny
below the average estimate among analysts surveyed by Thomson Financial.

In the following quarter, Oracle expects to earn 26 cents per share, excluding certain expenses, also a penny below analyst estimates.
Oracle’s shares gained 12 cents to close at $12.69 on the Nasdaq Stock Market, and then backtracked by 8 cents in extended trading.

This marks Oracle’s second major shake-up in a little over a year. Shortly after completing an $11.1 billion acquisition of PeopleSoft Inc., Oracle laid off 5,000 employees, including a chunk of its own work force.

Oracle has spent nearly $20 billion on acquisitions during the past 14 months in an offer to lure customers away from Germany-based SAP, the leading maker of software that enables companies to automate a wide range of administrative tasks.

The expansion so far has created a much larger company worth less than when the expansion began. Oracle’s market value has declined by about $4 billion since the end of 2004.