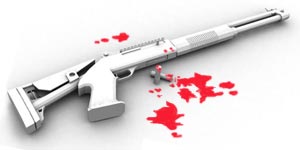 A 94-year old man accidentally shot himself in the abdomen while cleaning his shotgun. Luckily he is expected to recoup totally, inspite of the fact that it was not until the next morning that he received help.

The man called Marcis Sturghill was attempting to clean his .20-gauge shotgun when it released and hit him in the abdomen at around 7 p.m. on Sunday, said County sheriff’s investigator Thomas Martin.

Martin said that before asking for medical attention, Sturghill waited for a home health care nurse to arrive about 8:30 a.m. on Monday.

Before the nurse arrived, Sturghill had cleaned the wound and wrapped it with a towel, Martin said. Sturghill was flown to The Medical Center in Memphis, Tenn., and was reported to be in stable condition on Tuesday.