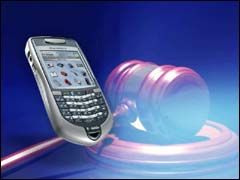 Research In Motion on Friday announced that it has have signed a definitive licensing and settlement agreement with patent firm NTP to end a never-ending legal battle that threatened to shut down BlackBerry service in the United States. All terms of the agreement have been finalized and the litigation against RIM has been dismissed by a court order. RIM will pay NTP $612.5 million in a “full and final settlement of all claims.”

The agreement eliminates the need for any further court proceedings or decisions relating to damages or injunctive relief.

The licensing and settlement agreement relates to all patents owned and controlled by NTP and covers all of RIM’s products, services and technologies. NTP grants RIM an unregulated right to continue its business, including its BlackBerry related business.

RIM CEO Jim Balsillie said the settlement did not leave him with “a good feeling,” but disputed the company had few options.

“It’s a lot of money for patents that will not survive for sure,” Balsillie said. “We are caught in an ambiguous time in the patent laws and the courts. No one feels good about this, but we are happy to put it behind us.”

With respect to the accounting treatment of the settlement amount of $612.5 million, RIM said it had previously accrued $450 million and the additional amount of $162.5 million would be recorded in the fourth quarter.

In deciding not to enforce an order that would halt BlackBerry service last Friday, U.S. District Judge James Spencer reprimanded the two sides for not making more effort to settle the matter out of court. Spencer said he hoped to have a decision on the injunction “as soon as reasonably possible.”

However, the judge reminded RIM that it had already been found guilty of patent infringement. Spencer said, “The simple truth, the reality of the jury verdict has not changed.” RIM was found guilty in July 2002 of infringing on NTP’s wireless patents.

The comment from Spencer led to public statements being issued last week by both companies saying they were willing to sit down and settle matters amicable once again.