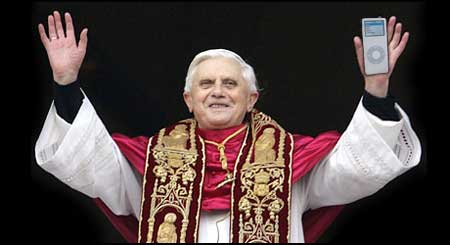 Vatican Radio employees bought the Pope his iPod to commemorate his first visit to the station’s headquarters.

When presented with the gift, his Holiness is understood to have noted that, “computer technology is the future”.

Compositions by Beethoven, Mozart, Chopin, Tchaikovsky and Stravinsky had been downloaded and installed on the player.

In addition, a sampling of the radio’s programming in English, Italian and German had been loaded.

These include a special 20-minute feature commemorating the 250th anniversary of Mozart’s birth, radio drama on the life of St Thomas a Becket and a feature on the creation of Vatican Radio, with original sound clips of the inventor of the radio, Guglielmo Marconi, and Vatican Radio’s founder, Pope Pius XI.

The Pope is the second famous septuagenarian known to have an iPod. Last year Queen Elizabeth II claimed to have bought a 6GB iPod Mini.

Prince Andrew, the 79-year-old monarch’s second son, was reported to be behind the move, having bought his mother a mobile phone and taught her how to use it in 2001.