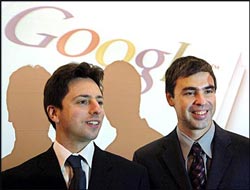 Google’s owners Larry Page and Sergey Brin were in a fix in Rio when a local restaurant rejected their credit card on a £30 (130 Vrazilian Reals) bill.

The billionaires had spent three days in sunny Brazil meeting local software engineers and members of the local office.

The two then decided to visit the Gula Gula restaurant in Ipanema and dined on salad, fish and tropical fruit, for such is the food of the very wealthy.

However, when the waiter returned with the £30 bill both found that their credit cards had been refused, it is said.

To their escape, one of them had a spare credit card after a search of his wallet. And that was not refused and things got settled. However, wonder which card the two were using.