TechShout
Home General Bill Gates’ Tax Returns are processed on a ‘special’ computer by the... 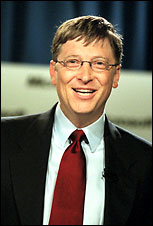 Bill Gates has stated that the US taxman cannot process his tax return on its standard computers, thanks to his enormous fortune.

Speaking to a Microsoft conference in Lisbon, the Microsoft chairman said that his fortune was humongous for the tax office computers. Apparently they just run screaming when they see his bulky records.

The tax office has had to splash out on a special computer that can accommodate all those billions, without the slightest ohhh no.

However, it does not always work, as the IRS tends to forget where the computer that stores Bill’s data is kept.

Bill says that he constantly receives notices from the tax people stating that he has not paid something and then getting another letter saying sorry they forgot to look on his special computer.

Bill did not disclose what operating system his special computer uses.