Just like the Alcatel One Touch Tab 7, Three UK is now offering the Gemini D7 for a discounted rate if you purchase it in a bundle with a Huawei MiFi device. Both the tablet and the MiFi Starter Kit with 1GB data on Pay As You Go can be yours for a rather affordable amount of £99.97.

As you may already know, the MiFi gadget creates a Wi-Fi hotspot that lets you have an internet connection on your tablet practically anywhere. The slate sports a 7-inch touchscreen on the front panel that apparently makes it compact enough to be held in one hand. And as the Amazon Appstore is pre-loaded on the Gemini D7, you can expect a paid Android app or game for free every day. 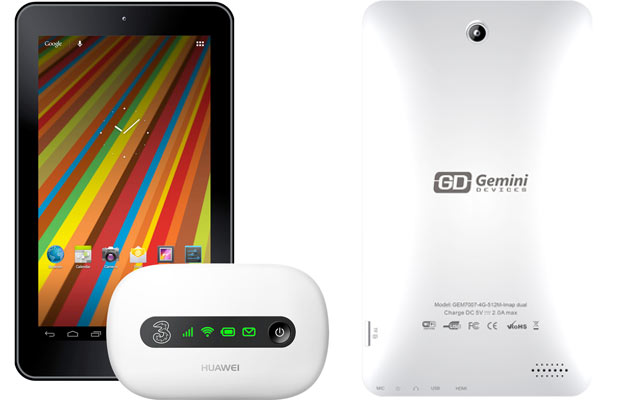 It should be able to support at least a couple of applications at the same time as a dual core processor rests under the hood. And as far as the operating system is concerned, users can look forward to the Android Jelly Bean OS. Apart from Wi-Fi, it features GPS for turn-by-turn navigation and NFC for instant data transfer to compatible devices.

All of these components are crammed within an exterior that measures 192 x 117 x 11 millimeters and weighs in at 576 grams along with the box. It is graced by a 0.3MP webcam and a 2MP rear camera and arrives with 4GB of internal memory in tow. The storage is expandable by up to 32GB using a microSD card.

The Gemini D7 is now available via Three UK website and retail stores with the Mi-Fi kit for the aforementioned price.