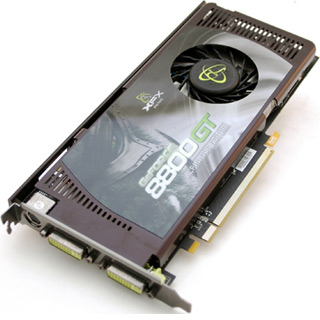 Graphics card manufacturer XFX has released the GeForce 8800 GT Alpha Dog edition, in India. Just like all the other members of the GeForce 800GT family, the Alpha Dog also incorporates a unique thermal fansink design that enables a punch up in its core clock from the industry standard 600 MHz to 625 Mhz. This allows it up to 8 degree cooler in 3D applications.

The other technical enhancements bundled into the sleek glossy black XFX GeForce 8800 GT Alpha Dog gaming graphics card is an improved fan speed and better air flow, making certain that this 8800 GT is cooler than its competitors while still maintaining its sleek, single slot design.

GeForce 8800 GT includes an aluminum stress bar to help stabilize the PCB. The card is HDTV-, SLI-, HDCP- and RoHS-ready, giving users world-class TV-out functionality and the ability to magnify their performance abilities.

In addition, it offers notably superior scalability on the top PC games, and up to 512MB of unbelievable DDR3 power.

Dual Dual-Link DVI allows the 8800 GT to drive the industry’s largest and highest resolution flat panel displays, supporting digital output of up to 2560×1600 on not one—but two— displays.