Spanish smartphone maker Geeksphone was responsible for the first Firefox developer handsets and now, the company is looking to launch the first multi-OS handset, the Revolution. This device will be available with Android by default, but you’ll have the option to choose which OS you want pre-loaded.

The company notes that only community-supported platforms will be provided, like Mozilla’s Boot2Gecko which is now known as Firefox OS. In the future, we might end up seeing Ubuntu for phones, Sailfish and other open source development being supported. Switching to another OS is said to be seamless with the company’s 1-click OTA system. The Geeksphone Revolution, however, won’t be meeting eyes with major players in the smartphone market as the handset falls in the entry-level category with not so impressive specifications. 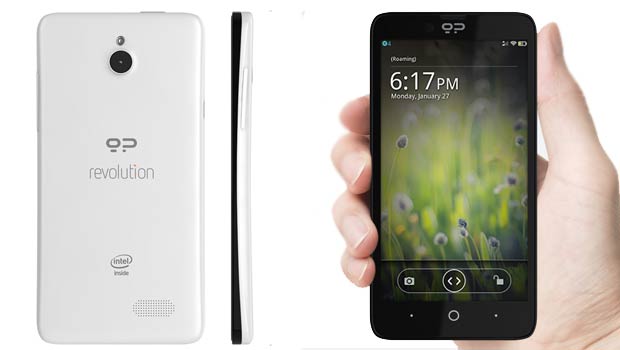 The Geeksphone Revolution will have a 4.7-inch IPS LCD panel, but the resolution will be just 960 x 540p qHD. Then there are low memory provisions of 1GB LPDDR2 RAM and 4GB eMMC storage. A microSD card slot is also provided supporting up 32GB. The company has chosen a dual core Intel Atom Z2560 processor clocked at 1.6GHz to power up the smartphone. While the handset does look quite attractive, it will have dual cameras, an 8MP snapper on the rear and a 1.3MP lens on the front.

As reported by Android Authority, the Geeksphone Revolution will go on sale in Europe on February 20 for a premium price of €289.

Here are the key specifications of the Geeksphone Revolution: