At one point of time when one spoke about gaming in India, one could not go beyond Mario, Tetris and Aladdin. Then came the Counter Strike era in Indian gaming which turned out to be almost a religion for most gamers. And in the current times nothing could get bigger than the Xbox 360 which was officially launched in India this September. It has emerged far more than a gaming console. And hey it even gave India its first ever gaming booth babes. 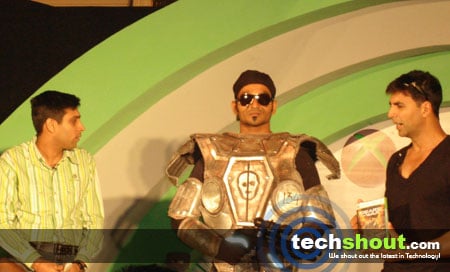 Today, Microsoft Entertainment and Devices Division announced the launch of its highly awaited games namely Gears of War (GoW) and Viva Piñata for the Xbox 360 platform. The launch of the new Xbox 360 games was held at Hilton Towers in Mumbai, India. Present at the launch was Mohit Anand, Country Manager, Microsoft Entertainment; and Akshay Kumar, the famous Bollywood star and Brand Ambassador of Xbox 360 India. 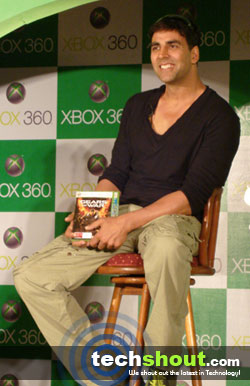 In addition to the launch of the super successful Gears of War and the kids’ exclusive title Viva Piñata, Microsoft announced some of its forthcoming game titles Dead or Alive 2, Lost Planet, Superman Returns, Call of Duty 3 on the Xbox 360 gaming console. The Xbox 360 game titles are priced at Rs. 2510 each and will be available to gamers through Microsoft’s strong network of resellers across major cities in India.

Gears of War surely needs no introduction. (It is one game that everybody at the TechsShout.com headquarters is totally glued to…can’t get enough of it). The third-person tactical action/horror game has been developed by Epic Games exclusively for the Xbox 360 video game console. While Gears of War caters to the grown up gamers who are more inclined towards the action genre of gaming, there’s something more fun-filled for the little ones too. Created by the world-renowned video game developer Rare Ltd. and Microsoft Game Studios, Viva Piñata invites game-players to run away to Piñata Island, where wild-roaming, living piñata animals are searching for a home.

Speaking on the launch of the two new 360 games in India Mohit Anand said, “We are delighted to offer our Indian gaming enthusiasts the two biggest and most anticipated games Gears of War and an unusual game about habitat, Viva Piñata from Xbox 360. Gears of War is by far one of the best graphic-intensive games available on Xbox 360 and one of the finest games available on any platform today. Viva Piñata, on the other hand is more

of a family game where gamers have to turn a misused plot of land into a beautiful garden overcoming various challenges. Xbox 360 today has over 35 titles of different genes available and will additionally be releasing more innovative and enthralling games for the gaming enthusiasts in times to come.”

Mohit Anand presented Akshay Kumar with a copy of the Gears of War game.

On the occasion, Akshay Kumar said, “I look forward to play the new games on my Xbox 360. Gears of War is one of the most awaited game from Xbox 360 and with the launch of the new gaming titles I am sure that the gamers would have a thrilling experience while playing on their favorite console.”

All in all, the 360 games launch event went off really well, however the downer was the Indian adaptation of the hero of Gears of War who was dressed in this (real cheap looking) metal robe. Guess Microsoft could have come up with something better. Let’s just hope that looking at the Indian Gears of War man, doesn’t deter the Indian gamers to go in for their own copy of the otherwise awesome game, our endorsements on the game’s brilliance people.