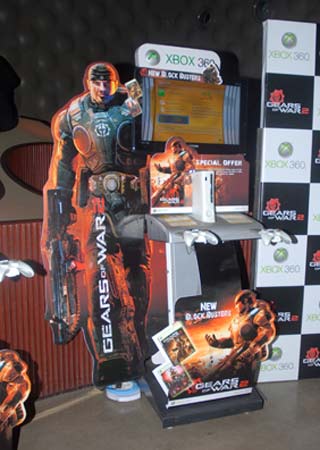 Microsoft is all set to release the Gears of War 2 on November 7, 2008, yes that is tomorrow. Hitting as many as 20,000 retailers worldwide, the highly anticipated third person shooter game is Microsoft’s gift as holiday season approaches.
In US itself the game will be available across 10,000 retail stores from 12:01 am local time onwards on November 7.

Also, those attending Midnight Mayhem flagship events in Los Angeles, New York City and Bellevue, Wash., have the chances to win limited edition “Gears of War 2” Xbox 360 consoles and gifts that include autographed copies of the game and a chance to meet the creators from Epic Games. Also those purchasing the game from a participating retailer will get an exclusive Xbox Live token for download of an in-game and a gold-plated Hammerburst to be used for multiplayer gameplay.

The game is available for an estimated retail price of $59.99 USD as a Standard Edition. The Limited Edition is available for ERP of $69.99 bundled with a SteelBook DVD case and 48-page hardbound book: “Beneath the Surface: An Inside Look at “Gears of War 2.” The book consists of character profiles and concept art.

The Gears of War 2 Limited Edition also brings with it a bonus DVD that includes in it making-of-documentary and keepsake photo of Dominic and Maria Santiago and Xbox LIVE token for unlocking gold-plated Lancer for online play.

What more? All the copies of the game also come with an Xbox Live token for downloading Flashback Map Pack without any charge. It includes five popular original Gears of War maps of Canals, Gridlock, Mansion, Subway and Tyro Station; all updated especially for new graphics of the new game.